In summer, our long hot days bring in the sea breezes – calling sailors to reach for far horizons. This year we embarked on another great adventure to our favourite destination – Lord Howe Island!

Frankie, Seb, Danni, Ross and Jono were intent on practicing and extending their sailing and expedition skills – and Josh came along to support the process. Lying some 400 nautical miles from the South Passage, the island is on an impressive volcanic ridge which rises over 4500m from the sea floor, creating sheer mountain peaks 800m above sea level. Being a World Heritage site with fascinating island ecology, we were keen to get there and explore the forest and reef.

We were in high spirits as we sailed over South Passage bar with a favourable forecast  – being fully stocked with our provisions for two weeks and looking forward to the relative isolation of being incommunicado, bound for paradise!

We established a watch system to ensure everybody could plan for meals and rest in between sessions on the helm – tiller steering to maintain our course through the incredible blue waves and long dark nights. Soon the exhaustion crept in and we would fall into bed fully clothed after each watch, snatching some disturbed sleep before we were required on deck again. Seasickness medication does very little for Seb and – as expected –  he entered his own world of suffering for a few days. Time and again he bounces back from these offshore experiences and willingly commits to do it again, testament to his resilience and determination.

We noticed many more birds as we approached the island – Sooty terns, Frigate birds, Australasian Gannets and Red tailed Tropic birds were feeding around us – and indicated we were on the right track as many of them headed towards the island at sunset.

The third day at sea dawned with the distant outline of mountains, capped with orographic clouds glowing with the sunrise. We had set the sea anchor after sailing through a torrential downpour that accompanied terrific thunder and lightning. It took a mammoth effort from all the crew to haul it back on board… next time we will use the tripping line! We approached the sea cliffs, wondering at the number of birds wheeling and crying above us, returning to their mates tending eggs and chicks on the ledges. 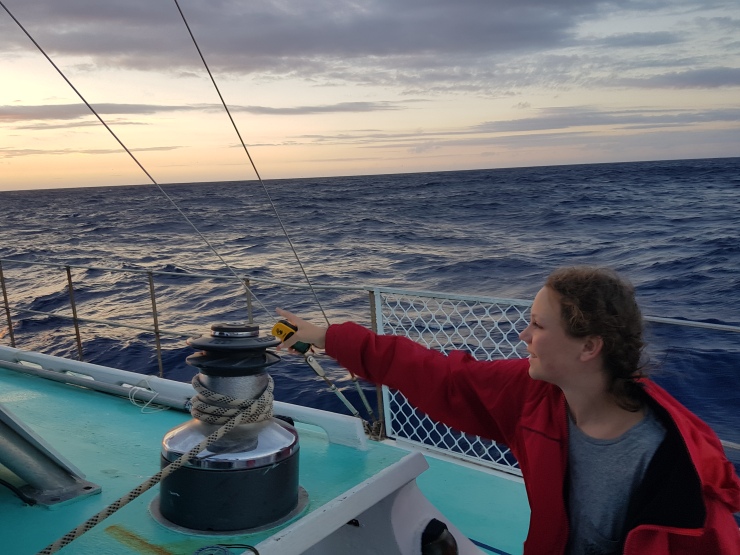 We entered the lagoon through the north channel after waiting from clearance from the Harbourmaster – the clarity of the water was amazing, and we gazed down at the coral bommies surrounded by fish as we picked up a mooring nearby. After 3 days at sea we were overwhelmed with the sight of fertile mountains, sounds of the sea birds and waves breaking on the outer reef, and the steadiness of the decks – feeling the relief of making landfall after our crossing. Pulling the damp mattresses out to dry in the sun, we prepared to take the dinghy to shore.

Six days passed quickly as we explored most of the island using masks and snorkels, bare foot hiking and the bicycles we hired from the Wilson family. So many beautiful parts of this island to discover… the fish at Ned’s beach, the Norfolk Pines at North Bay, finding Peter at Boat Harbour… after climbing to the Goat House cave we stopped for a swim at Blinky Beach and had the most wonderful time body surfing the waves with reef sharks.

The reef sharks are Galapagos Whalers – abundant in the presence of so many fishing boats, so we figured they were a sustainable source of food as well as being easy to catch! One night we hung a shark carcass off the back of the boat, waiting to see what would come and eat it (turtles and other reef sharks being likely candidates). Sitting with my feet inches from the water, I was peering into the dimly lit water and expecting more action – it was strangely quiet. Suddenly an enormous shape slid into view and right under my feet, I saw the second largest shark I have ever seen in my life! Instantly pumped with epinephrine, I leapt for safety while it circled back and took the carcass off the rope with a flick of it’s massive blunt head. Then it was gone, and the water remained quiet for the rest of the night. We heard reports of a large Tiger shark spotted at the jetty during the day – and we ceased snorkeling in the deep water channels!

The biogeography of this and other remote volcanic islands is fascinating – many unique species have evolved from the castaways that managed to survive and adapt to their new environment. Lord Howe Island Hens, Emerald Doves and Kentia Palms are the obvious locals, while Horned Turtles (now extinct) and Lord Howe Island Phasmids (saved from annihilation by rats) among many other species, stories and interesting facets of this island are really well presented for visitors at the Museum.

We also learned about the ludicrous situation with energy use on the island. When I first visited in 1999, I remember hearing the thumping diesel generators in the middle of the village, and they were still being fed by weekly deliveries of thousands of litres of diesel each week from the mainland on subsequent visits. This time the generators had disappeared so I was wondering about the rise of renewable energy sources – the resorts all tout their eco-credentials and the island itself is a jewel in the crown of World Heritage sites. Surely times had changed… it transpired that there was a significant federal funding grant for a solar farm and wind generators to replace the old diesel generators some years ago. Apparently local influences – worried about the effect on transportation costs if the subsidised diesel was not getting delivered each week – blocked the project and the old facilities were upgraded – with more diesel generators installed in the forest! Another disgusting example of vested interests blocking positive social and environmental changes that we all need so desperately. 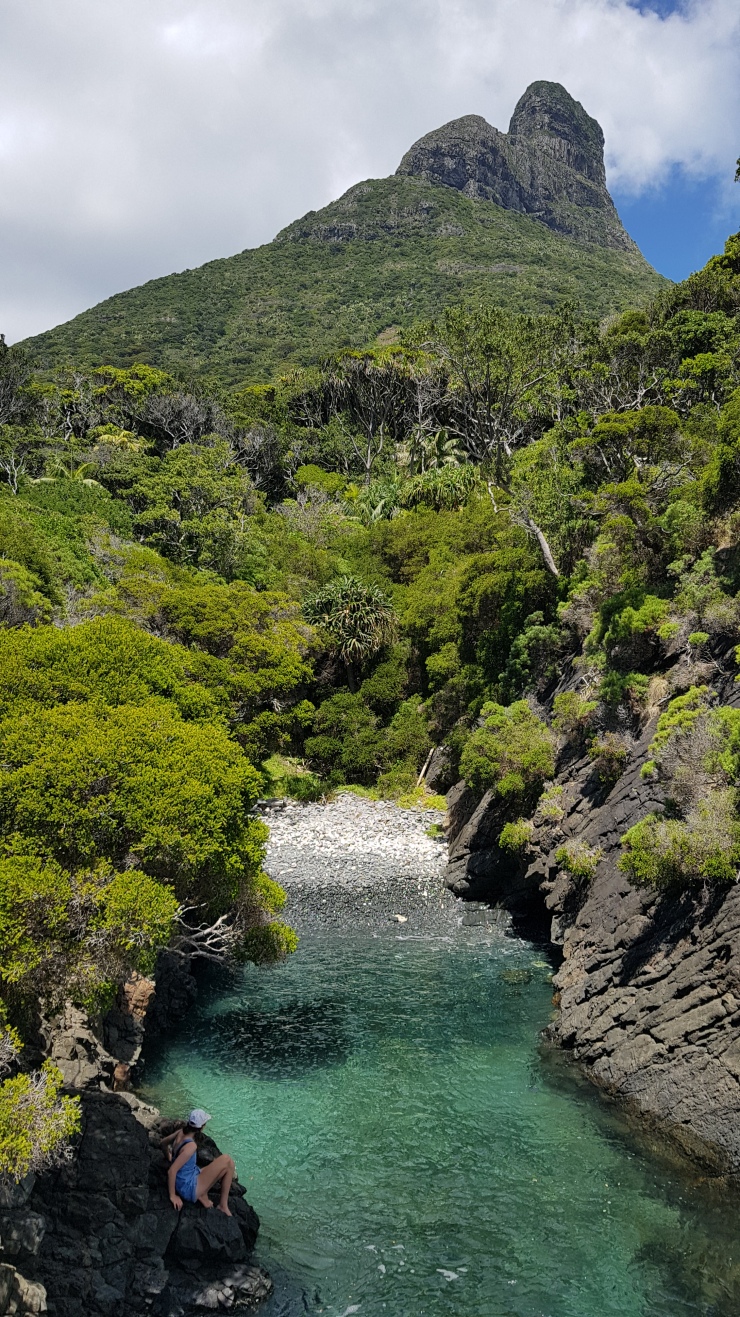 It was hard to consider leaving this magnificent environment, yet we all had commitments calling from the mainland – so we cast the lines and set sail again, missing the chance yet again for a sail around Balls Pyramid. Next time we will definitely prioritise sailing close to this spectacular monolith!

Of interest we were talking about a previous trip to the island at Bob and Alexina’s “Adventure Club” in Boonah when Ian Gasking spoke up from the crowd… “I’ve climbed that!” We were astounded because there are select few people who achieved this before the “Land Lobster” phasmid was found clinging to survival there in 1964, and climbing was banned in 1986. Yes – the story unfolded that Ian was part of the team including Rupert Murdoch and Dick Smith – who as young men had sailed over there as part of a great adventure led by Rick Higgins. Their spirit of adventure is perhaps also reflected in the businesses that were born at that time – despite being advised against it… and in case you are considering a flying visit to Lord Howe Island – we think you should reconsider your mode of transport for a much more adventurous and wholesome way!

Plan it yourself! Begin it now…

#Repost @sscbc A gorgeous photo from above, taken during the Mercedes-Benz Mornington CBA Couta Boat Nationals in December.
Steering for Flinders reef #powerstance #flythebluepeter
Sailing into the sunset for a few days of #restandrelaxation #mulgumpin #flindersreef
Yaul heading off on a big adventure with Midge today... #bluepeterskippersandfriends #flythebluepeter
A special moment sailing past a large herd of #moretonbay #dugong at #amitybanks
Ross took Midge out for a solo sail today #sailingfree #atthehelm #steeryourownship